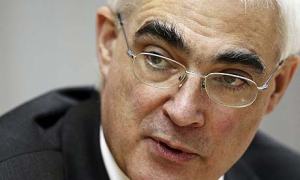 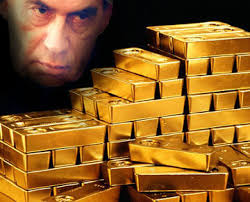 Darling was central to the economic calamities of the New Labour Government. His record included a fixation with financial services and a property boom – which drove growth, but at the expense of manufacturing and production. It also facilitated an ever increasing disparity between the North and South within the UK – as the wealth division between the City of London and the rest became a gulf. And it included a record of poor financial oversight and regulation which led to the banking crash and contributed to the deepest recession since the 1930s.

Critics further highlight the desperation of an economic clique in Whitehall to provide tax support to hedge funds and financial capital above the overall health of the economy. Darling was very much in the forefront of this.

His response to the banking crisis was an extension of this economic strategy. He sought to deflect criticism from himself onto Prime Minister, Gordon Brown and Mervyn King at the Bank of England. But he cannot separate himself from the decisions that led to the crisis. He was Labour spokesman on Treasury Affairs and then Chief Secretary to the Treasury across the period of 1992-1998. Together with Gordon Brown, Tony Blair and Ed Balls, he was an architect of – if not at least heavily complicit in – the deregulation and tax cuts which let the financial sector spiral out of control.

In his time as Chancellor serious errors and misjudgements on his part led to the banking crisis. Not least his proclamation of an extended period of UK austerity, proclaiming the need for cuts “deeper and tougher” than those instituted by Margaret Thatcher. His “new deal” also resulted in a massive cut in capital investment when it should have been expanded in the wake of credit crisis to boost growth, jobs and revenue.

In May 2012, the former Governor of the Bank of England, Sir Mervyn King criticised the lack of action by Alistair Darling and the last Labour government when, in September 2007, (in the earliest days of the banking crisis) the first UK Bank, sorry English bank, Northern Rock, failed, which King said could have cost up to one million people their jobs. Decisive action would have at least mitigated the problems encountered by other Banks including HBOS and RBS a year later.

Darling learnt no lessons from the collapse of Northern Rock and his March 2008 Budget speech just six months after the first UK bank collapse makes embarrassing reading today: “…we have maintained confidence and stability in the banking system … We have turned welfare into work and borrowing into wealth creation.”

It was the UK regulatory authorities headed by Chancellor of Exchequer Alistair Darling that had the powers to investigate the RBS / AMRO take over but ignored the fact that no due diligence was done by RBS on a deal worth £49 billion before they gave its approval for the world’s biggest bank take over deal that brought about the collapse of the Royal Bank.

Incredibly, the FSA overlooked the rules on capital by allowing Goodwin and RBS to dip below 4%, below the minimum regulatory requirement on capital, to do the ABN Amro deal.

So much for relying on the UK regulatory body and compounding the errors Fred Goodwin ( at that time) was still an adviser to Alistair Darling as Chancellor, and a member of a key Treasury body advising Labour months after the banking crisis and quitting RBS. 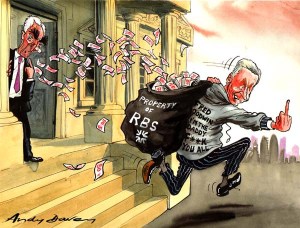 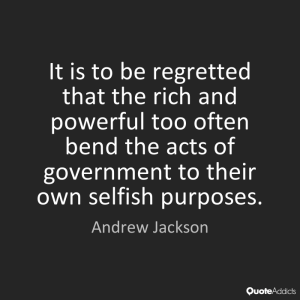 In 2007 the UK had urgent need for a leader capable of resolving a banking crisis brought about by the greed of bankers and investors The country were blessed with Gordon Brown and Alistair Darling when it desperately required a figure of the status of US President Andrew Jackson who when confronted with greed and avarice of a similar scale shut the entire system down and introduced a banking system that catered for the needs of the citizens of the US.

Jackson made many speeches but this one to the bankers and investors is most apt in this circumstance:

“Gentlemen! I too have been a close observer of the doings of the Bank of the United States. I have had men watching you for a long time, and am convinced that you have used the funds of the bank to speculate in the bread stuffs of the country. When you won, you divided the profits amongst you, and when you lost, you charged it to the bank. You tell me that if I take the deposits from the bank and annul its charter I shall ruin ten thousand families. That may be true, gentlemen, but that is your sin! Should I let you go on, you will ruin fifty thousand families, and that would be my sin! You are a den of vipers and thieves. I have determined to rout you out, and by the Eternal, (bringing his fist down on the table) I will rout you out!”

On September 10, 1833, Jackson removed all federal funds from the Second Bank of the U.S. and redistributed them to a number of state banks. Jackson succeeded in destroying the bank. Problem solved. 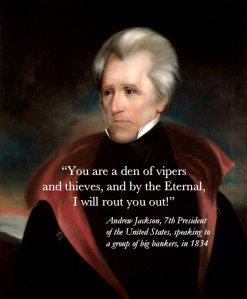 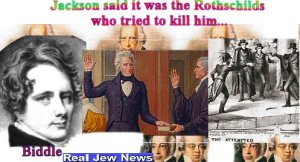 UK Alistair Darling abused his office when he instructed the Bank of England to print money (with no gold reserves to back it) and to flood the financial markets with £billions through a system called “Quantitative Easing”. The vast bulk of the new money was simply handed over (without precondition and minimal interest charge) to banks whose finances were in dire straits. When this initiative failed, in some circumstances e.g.. The Royal Bank of Scotland, he purchased all the banks bad debt (at the expense of every UK taxpayer) placing the country at greater financial risk as the major shareholder in banks with no future.

From that time, bolstered many times by newly printed money through further quantitative easing the UK stumbled from one financial crisis to another and incurred fresh debt, measured in £trillions to a number of financial institutions.

It is accepted in financial circles that the UK may never be able to balance the books despite an ever expanding period of austerity (now 10 years) imposed on the 95% of taxpayers who can ill afford the loss of income.

Pensions are at risk of default and poverty is widespread and growing relentlessly. A recent report placed 30,000 early deaths firmly with austerity measures.

But austerity does not extend to the bankers, investors and hedge funds who maintained their place of business off-shore. Despite carrying massive financial debt, (largely guaranteed by the taxpayer) many thousands of bankers and staff attract obscene and unjustified huge annual bonuses so that they would not be inconvenienced by the austerity measures in place throughout the country. What a kick in the teeth for the vast bulk of the electorate.

I expect Andrew Jackson would have allowed the banks to default, whilst insisting that banks honour payment of protected savings. There might have been many losers but they would have been heavily outnumbered by the winners. And the bankers, investors and Hedge Funds would have taken a massive hit. The rich and greedy, having dug themselves into a hole would have been required to get their shovels and dig themselves out.

But, the beast that is Westminster protected the few at the expense of the many. And Scotland still rejected independence. I despair. 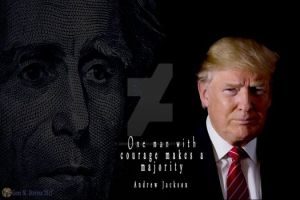 A Look at the US and President Trump

Within days of taking up the Presidency of the US President Trump ordered that statues of Winston Churchill and President Andrew Jackson, (consigned to the basement at the start of President Obama’s term of office) would be returned to their rightful place in the entrance to the White House. The order may appear to be of little significance but time might reveal the importance of the change.

I expect their are many in the UK who look across the pond and wonder at the springtime madness that seems to be gripping the political scene in the US. In particular the wanton violence in the streets and university campuses of States favouring the Democratic Party.

The violence is not spontaneous being organised and funded by faceless individuals, groups and organisations pursuing agenda’s designed to wear down the newly appointed President Trump and his administration.

The recent furore over a temporary (3 month) executive order banning the free movement of individuals to and from a small number of countries (previously proscribed by President Obama) had a single purpose, to challenge law and order and embarrass the newly elected President. And the women marching in protest against Trump (for allegedly giving voice to a liking for “pussy”) should be ashamed of their conduct and protests, which would have served better purpose had they been directed at the barbaric treatment of women in Saudi Arabia and many other Islamic States.

The insidious agenda of disruption, protest and release of privileged information is being orchestrated by parties under threat from President Trump and his Administration.

It is rumoured that the Federal Reserve (the President has no control over it’s decisions) is planning to undermine President Trump’s much lauded infrastructure improvements through a process of interest rate hikes and other anti-inflationary measures. Money and Credit will dry up. And the UK will suffer from the fallout.

The video “Storm Clouds Gathering” provides an excellent brief in support of the foregoing. I highly recommend a viewing: https://youtu.be/1MmfCX2H7N8