In recent times Unionist party MSP and activists have been constantly bleating about the unfair electoral system in Scotland which they allege has allowed the establishment of an SNP one party state. But they had been hoisted on their own petard plotting and scheming for many months under cover of the Calman Commission, working in secret designing a voting system which (they delightfully assured themselves) would prevent the election to office of an SNP majority. Having guaranteed their supporters a Labour/ Lib/Dem government would be elected in Scotland in perpetuity they committed their efforts to backing the successful devolution process.

Predictably, as planned, the election of the first devolved government to Holyrood in 1999 returned a Labour/LibDem  government.  A secret, secure future, free of the influence of the SNP had been delivered. Self satisfied and smug, members of the new government went about their business with breathtaking incompetence. Scandals, graft, nepotism, fraud and in fighting were prevalent. All the vices of unaccountable, dismissive despotic governance were deployed to the detriment of Scots.

Reflecting increasing dis-satisfaction with the Labour/LibDem government a number of new parties, Greens, SSP and Independent candidates were elected reducing the number of SNP and Unionist supporting parties. The timely warning from the electorate was ignored by the government and the level of largesse, waste and incompetence increased.

The SSP imploded with the leader and membership bickering endlessly. The Greens appeared to be overwhelmed by the election of MSP’s which required them to give up protesting, substituting the loss with constructive dialogue, which did not suit the agenda of the Party.

The SNP completed a root and branch analysis of the party which had not gained the seats projected in the campaign period. This brought about a party reorganisation. Senior officers were appointed to posts more complimenting their abilities. Alex Salmond and Nicola Sturgeon took on leadership roles together with John Swinney. The fightback had begun.

Attempts at gerrymandering the 2007 election in favour of the Labour party were made by the Labour Party Secretary of State for Scotland, Douglas Alexander who employed the most complicated set of voting papers ever presented to an electorate combining two totally different elections on the same day.

The resulting debacle exposed the weakness of an electoral system put in place by Westminster civil servants and the Labour/ Lib Dem leaders to thwart the electorate. Scots, (fed up with the incompetence) returned SNP MSP’s in a majority.

With no overall control the SNP Party formed a minority government which (if defeat in parliament was to be avoided) would require the employment of first class political skills. Alex Salmond and his leadership team were up to the challenge and provided effective government in Scotland despite the odds being stacked in the favour of the unionist parties who resorted to spoiling tactics throughout the duration of the parliament.

Gordon Brown, Prime Minister, believing he had all the power refused to acknowledge or meet with Scotland’s First Minister, Alex Salmond in any capacity whilst enjoying friendly relationships with the leaders of other devolved governments. Hardly the behaviour of a statesman. 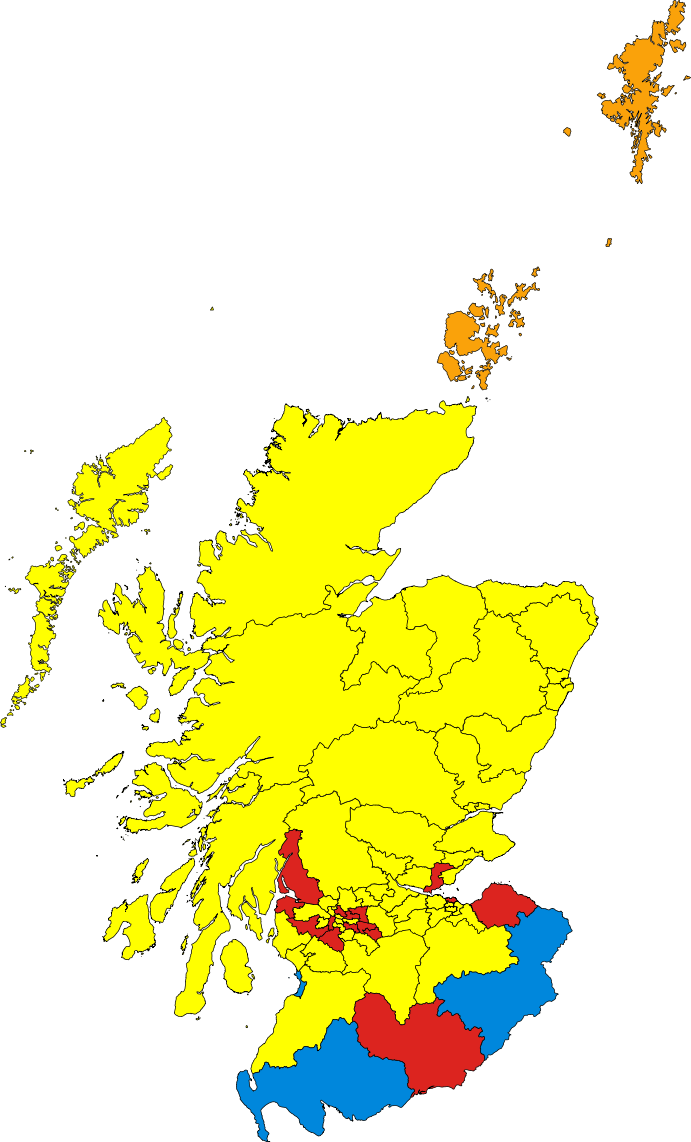 The 2011 election delivered the first majority government since the opening of Holyrood, which was truly remarkable since the “mixed member proportional representation system” used to elect MSPs had been implemented by Westminster with the purpose of preventing the SNP achieving an overall parliamentary majority. 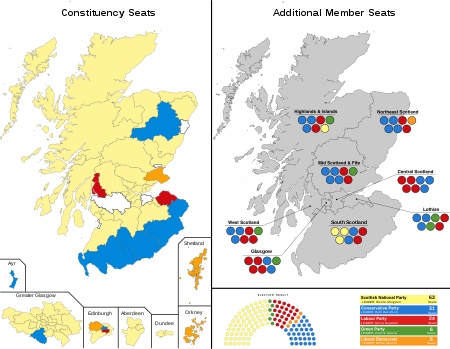 The outcome of the election was manipulated by the Unionist Press and Media who in the course of the campaign, relentlessly promoted the concept of “tactical voting” seeking to persuade the electorate to give their votes to the new girl on the block: Ruthie (put in place by MI6) Davidson (no mention of the Tory Party).

The tactics worked and the Tory alternate vote increased at the expense of the Labour and Lib/Dem vote which was significantly reduced but not transferred to the SNP.

The SNP was still returned to government in another landslide victory. but an increase in the Green Party vote meant that the SNP did not enjoy an overall majority in parliament.

This was construed by the Unionist Tory Party to be a signal from the electorate that their manifesto had been approved by Scots and the days of the SNP in government in Scotland were numbered.

The Unionist press, media and Tories, emboldened by a new found confidence that they are the next government of Scotland (in waiting) attacked the electoral system that in their view had failed, yet again to deliver the government it had been designed for. But the voting system had in fact saved the Unionist parties from electoral oblivion.

However, true to form the selective arguments they advanced in support of their whining conveniently failed to mention that, (had the election been conducted under the much vaunted “First Past the Post” voting system strongly supported by the Unionist parties in Westminster) the SNP with 42% of the overall vote would have swept the board and the unionist parties would have been wiped out. Indeed in the 2015 UK general election the Tory Party formed the next government with only 37% of the vote.

Scotland has been lumbered with an electoral system proven to favour poorly performing political parties with many more MSP’s than deserved. It is also evident that there is a democratic deficit in Scotland which needs to be urgently addressed. Wise counsel recently proposed the introduction of transferable voting and open lists, (allowing voters freedom of choice in their selection of transfer candidates) abandoning regional weighting which has been widely abused by the Unionist parties who persist in nominating questionable, poorly performing characters previously rejected by the electorate.

But the Unionist parties continue to deny Scots the benefits of progressive policy changes which would do much to improve the performance of Scottish parliamentarians, preferring to reward self interested party nobodies nominated through nepotism, with seats in Holyrood.

The 2015 election brought Prof Tomkins to Holyrood (as a Tory list MSP). Proclaimed by the Unionist Media and Press to be an expert in constitutional affairs they widely broadcast to the Scottish electorate that he had a deal of input, through the Secretary of State for Scotland’s office, to the 2015 Scotland Act which delivered a limited range of newly devolved powers.

The Holyrood parliamentary committee system of political accountability, (through which the views of the electorate, media, business and opposition political parties can be fed back to government ensuring good governance) works well. But it is under attack by the Media Press and Unionist parties who constantly disrupt and frustrate the good work of committees.

The foregoing gives credence to reports that Prof Tomkin (with not at lot to do for his large salary) had been tasked to create alarm and despondency at Holyrood, undermining and discrediting the committee system so that he would be able to bring forward proposals for change which, if implemented as planned would weaken SNP control in committees, increasing the second placed opposition Tory party membership. A form of job creation for Unionist party MSP’s who would have nothing to do otherwise. This he has duly done. He doesn’t hang about this chap.

Deputy Leader of the Tory Party in Scotland

A review, announced by presiding officer Ken Macintosh, follows concern that Holyrood is failing in its task of effectively holding the Government to account.

Backbenchers who represent the governing party at Holyrood should be banned from holding the key jobs on major committees, the Scottish Tories have said. The party also set out preliminary proposals that they said would ensure Scotland had a “parliament with real teeth” following the announcement that structures at Holyrood are to be reviewed.

If the measures are accepted SNP politicians such as James Dornan, convenor of the education committee and Local Government convenor Bob Doris would be stripped of their roles. The Conservatives also said that ministers should be quizzed by their opposition counterparts more regularly and that MSPs should serve on committees for the full parliamentary term.

Scottish Conservative chief whip John Lamont said: “The last parliament, when the SNP had a majority, exposed the flaws in our democracy. SNP MSPs toed the party line, put party before parliament, with the result that bad laws were railroaded through.”

* He conveniently forgets to refer to the Westminster, House of Commons legislative committees who’s membership also reflects the proportion of MP’s at Westminster.

He went on: “The Scottish public ended the SNP’s majority, and we now have a more balanced parliament. So we welcome the Presiding Officer’s plan to ensure we get a parliament with real teeth. We don’t need yet more politicians in Scotland. We do need a parliament with more clout which can hold this Government to account. Our proposals will help do that – and we hope they will attract cross-party support.”

* But this example of the 2015 Holyrood election reveals the inadequacies of the existing system. North East Scotland:

The Commission on Parliamentary Reform will study the role of Holyrood in scrutinising legislation, the committee system and parliament’s independence from the Scottish government. The study will be led by the outgoing Electoral Commissioner John McCormick.