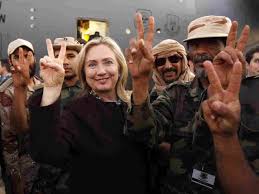 Tony Blair urged Khadaffi to find “a safe place to go” as part of a managed process of political change before the situation reached “the point of no return”. Failure to accept the offer would result in his capture or death.

Hillary Clinton’s controversial private emails recently revealed that Tony Blair’s office fully advised her office of the details of his conversation with Khadaffi She was told that Blair had said to Khadaffi: “The absolute key thing is that the bloodshed and violence must stop. If you have a safe place to go then you should go there, because this will not end peacefully unless that happens and there has to be a process of change. That process of change can be managed and we have to find a way of managing it. I have talked to people and everyone wants a peaceful end to this.”

Blair later telephoned No 10 to say that he had been contacted by “a key individual close to Khadaffi (his son) and that the Libyan dictator wanted to “cut a deal” with Britain. Cameron, who ordered RAF air strikes against Khadaffi’s forces – did not take up the offer. http://news.sky.com/story/blair-urged-gaddafi-to-flee-libya-to-avoid-death-10344435

21 Oct 2011: Hillary Clinton arrived in Libya 2 days before the Assassination of Khadaffi and assumed operational control

In a meeting with the allied forces chiefs she said: “Washington wants to see Libyan leader Muammar Khadaffi captured or killed.” Behind the secret visit there was evidently an agenda in Washington ensuring American ‘fingerprints’ would be all over the so-called ‘success’ of NATO in Libya. But killing Khadaffi would be an illegal assassination and managing that was the real purpose of Clinton’s apparently spontaneous visit.

23 October 2011: Agreement finalised between Khadaffi and the Allies that he and his supporters in Sirte would be granted a safe passage to another country – The convoy would fly white flags on all vehicles and weapons would be reduced to side arms only.

Khadaffi and 66 of his followers departed Sirte, in broad daylight so there would be little chance of mistaken identity, to be attacked with hellfire missiles launched from drones, controlled from the USA. The “white flag” convoy was incinerated. The destruction of the convoy was a war crime.

The actions of the allies after the event was yet more disgraceful since in accordance with Islamic Law Muslims are supposed to be buried not later than one day after death. But the bodies of Khadaffi and members of his family were held and a cold room and on public display for over a week without explanation.

Adding to the over driven hype, orchestrated by the allies shortly after, there is the weird press briefing that Khadaffi had been found cowering in and was forcibly dragged from a drainpipe. The subsequent filmed abuse of the former leader of the country was disgracefully distributed to television audiences world wide together with a filmed interview of the United States’ Secretary of State, Hillary Clinton, laughing and expressing delight with Khadaffi’s death, stating, “We Came, We Saw, He Died.” https://www.youtube.com/watch?v=Fgcd1ghag5Y

Others relevant articles previously published on my blog

Summary: Can the USA be trusted to police the world fairly? I think not.!!! As an independent nation ( which I hope becomes a reality soon) Scotland should declare the much vaunted one sided “special relationship” to be at an end. Nuclear weaponry, lease loaned by the USA to the UK should be removed from the West of Scotland without delay.