Mundell Plea – Let’s all be civil to each other

David Mundell calls for a “reboot” of the relationship between Holyrood and Westminster, and said there should be an end to the “petty politicking and sniping” between the Scottish and UK governments after the Scottish elections in May.

He cited the “extensive and collegiate” inter-governmental work carried out on issues such as the Forth Road Bridge closure and the response to the falling oil price. All this goes to show that we can and do work well together, but why can’t this be the norm for all our interactions? The problem is this positive work behind the scenes is not what gets the coverage. What does are the spats and fall-outs.”

Comment: inter-governmental work. Forth Road Bridge and falling oil price? No response as yet from Westminster. He lives in a dream world.
The SNP said Mr Mundell should match his “warm words” with real action, and that it was looking for real evidence of the UK government’s willingness to cooperate.

Comment: Mealy mouthed Mundell plea for unity is a deceptive ploy and should be treated as such.

Scottish Secretary is behaving like the Governor of a colonial outpost

Would it not be more honest for David Mundell now to delete the word “for” in his official title and replace it with “against”? Once again our Secretary of State for Scotland honours us with a flying one-day visit, this time to announce his refusal to endorse a perfectly sensible visa scheme for post-graduate overseas students, which is widely supported in academic circles and has already proved successful in bringing significant economic and financial benefits for Scotland (“Outcry as Tories block work visas for overseas students”, The Herald, January 12).

It seems he is happy for our universities to collect large tuition fees from international students from outside the EU, but when they qualify and some of them wish to remain in Scotland to undertake post-graduate studies and thus contribute to the Scottish economy, Mr Mundell blocks the re-introduction of the special visa scheme which worked well in Scotland for several years until recently. What a negative and short-sighted attitude.

A few months ago in the House of Commons Mr Mundell positively revelled in opposing every one of the 40-odd proposed amendments to the seriously-flawed Scotland Bill, based on the watered-down Smith Commission proposals for increased powers for the Scottish Government. He follows the same totally negative line at every monthly session of Scottish Questions, proving that he is quite clearly the lackey of this anti-Scotland UK Conservative Government.

I can remember the day when honourable Conservative Scottish Secretaries like George Younger, Malcolm Rifkind and Michael Forsyth stood up even to Margaret Thatcher in defence of Scotland’s specific interests. But the present incumbent behaves more like the British Governor of a colonial outpost than the defender of Scotland’s interests inside the Cabinet. Yet Mr Mundell is Scottish Secretary only because he is the only Tory MP elected in Scotland, scraping home last May by just a few hundred votes. He is hardly the popular choice of the Scottish people, and is certainly not increasing his popularity by his current behaviour.

https://www.youtube.com/watch?v=SaMNdhrpxFw The infamous Frenchgate memo. Bluff and bluster. He was complicit in the Carmichael affair. 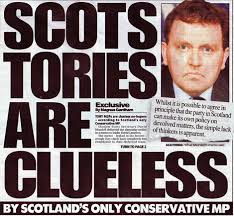 Mundell Governing Scotland with no Shame

David Mundell has been accused of governing with “no shame”, after the welfare section of the Scotland Bill passed without any amendments from Labour or SNP being accepted by Scotland’s sole Tory MP.

North Ayrshire and Arran SNP MP Patricia Gibson said welfare cuts would have a devastating impact on Scotland, accusing Mundell of being a “colossal governor-general” who presided over the Scottish people with “no shame”.

She said: “The people of Scotland would consider it unreasonable that a party that has a far weaker mandate in Scotland than at any time during any of the years in which they last had a majority government, pontificates over what powers Scotland should have, while reneging on the all-party agreement arrived at in Smith.

“The Secretary of State clearly thinks that this situation is entirely reasonable, and presides over the dispatch box like a colossal governor-general, with no shame, and takes on the elected and legitimate representatives of the huge majority of the Scottish people.

Mr Salmond, Scotland’s First Minister was questioned about the Scotland Bill by Committee members at a meeting in Westminster. The extract provided provides example of the attitude of Mundell to Scotland and it’s first minister. His entire persona is one of blatant hatred of anything political that is not Unionist. His post and his cronies in the Scotland Office should be removed. Scotland does not need to carry the millstone of Unionist control. 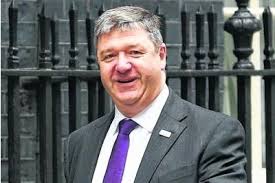 David Mundell: I think it is a fundamental part of the relationship between Holyrood and Westminster that you appear before this Committee .

Some of your critics would suggest that you have a political advantage in ensuring that there is not a good relationship between Westminster and Holyrood. What positive evidence can you put forward to rebut that particular criticism?

Mr Salmond: I think probably the most positive evidence has been that I looked for the instigation of a process of dispute resolution, of communication, of joint working between ministers, which had been in abeyance for at least five years before the Government in Scotland took office.

Over that period of time there were many celebrated disputes, some of which got into the public domain between the then Scottish Executive and the administration, despite the fact they were of the same political party.

For example, Attendance Allowance and free personal care was a particularly famous example.

A long running dispute now in terms of the Barnett consequential’s or not of Olympic regeneration of spending would be another example.

The evidence I would cite, David, is the fact that I was so keen on having this process resumed after it being in abeyance for a substantial period of time.

I think like this: I think across a range of things, and I have cited some examples, it is the job of governments, of whatever political hue, just to get on with the job and cooperate to do that, and I have given you a range of examples.

Could I just say to you, there are enough of these legitimate political divergences in terms of aspiration for the future constitutional status of Scotland without having to invent disagreements over other things.

It has never been my purpose to invent disagreements. On the contrary, I have been looking for resolution and cooperation, where cooperation and resolution can be found.

David Mundell: You have to concede, given your comments about parity of esteem, that some comments you have made in your capacity as First Minister of Scotland, have not been reflective of a parity of esteem from your perspective?

Whilst your memorandum indicates that UK Government has not accepted a change in relations over the period of devolution, leading to a lack of respect for Scotland’s status, surely there is plenty of evidence that you have not demonstrated a respect for Westminster and the UK Government?

Mr Salmond: If you are going to give me evidence, David, I think you had better cite it.

With parity of esteem the difficulty has been the assumptions which are still held in many areas of Whitehall that the Scottish Government, the Scottish Civil Service, the Scottish Parliament are actually another department still of the Westminster Government; but the same would apply, incidentally, to the Northern Irish and Welsh.

I suppose the concrete evidence I would put forward to say that the position is the one that we suggest, that we have been trying to find structures which would have that parity of esteem as the essence of the relationship (and the parity of esteem incidentally was implicit in the Memorandums of Understanding that were agreed at the outset of devolution; that is what they were about), is that on all of these occasions that I could cite, let us say the one I took on regeneration expenditure from the Olympic Games — not the Olympics itself but the question of the Barnett consequential’

s of the regeneration expenditure and whether the financial rules would mean that that expenditure should be Barnetted — the position of the Scottish Government is exactly the same as the Welsh administration and the Northern Irish administration, despite the different political complexions.

Basically in all of the key examples that I could cite where there is a divergence of opinion, then the divergence is not one between Scotland and Wales or Scotland and Northern Ireland, it is one that the devolved administrations normally have a divergence from the position of the Westminster Government or perhaps just the position of Westminster departments, forgetting that the political structures have changed very substantially and continue to change.

David Mundell: But those other administrations have taken a different approach to setting out their case. They have not used the media to the extent that you have. I think you would have to concede that.

David Mundell: But not in the context of the conduct of the dialogue between the Scottish Government and the First Minister of Scotland, and the Prime Minister and the UK Government.

I think one thing that surprised many people, myself included, Mr Salmond, was that in the period of the recession nearly a year went by without you having any dialogue at all with Gordon Brown. What is the reason for that lack of dialogue?

That was nothing to do with me; I was perfectly happy to speak to the Prime Minister, but I think that the then Prime Minister was upset with the Election result.

I am delighted to speak to the Prime Minister at any time and would love to do so on much more regular occasions.

I accept of course that the then Prime Minister has many, many competing demands, but the wish for communication from the Scottish administration and I suspect the Welsh and Northern Irish administration is very great.

That is why we have been so keen to re-establish structures which at least would set in train that process.

There have actually been two meetings about the recession with the Prime Minister and leaders of the devolved administrations. One took place last spring and the other was at the September JMC meeting where the issues of the economy and the recession were discussed in some detail.

Would it be my wish that there had been more? Yes, it would, although it should be pointed out that these are not the only inter governmental meetings.

For example, the financial take place on a fairly regular basis. I think meetings like that are extremely useful. Hence the meeting and summit on jobs that was held in Easterhouse yesterday with myself and the Secretary of State for Scotland, and crucially the people employed in Scotland, in delivering the various programmes either under the Scottish Government or the Department of Work and Pensions in terms of enabling us to accelerate recovery.