Faslane on the Gare Loch.

Faslane is home to Britain’s strategic nuclear submarine fleet and is the headquarters of the Royal Navy in Scotland. All four of Britain’s Trident operational strategic intercontinental missile submarines are based at Faslane. More than 7,000 navy and civilian staff work at Faslane – the largest number employed on a single site in the country.

In 2002 the bulk of the operations at Faslane were handed over to Babcock & Wilcox Enterprises, Inc.(BWXT) (sole manufacturer of naval nuclear reactors for submarines and aircraft carriers) who also own Rosyth, in Fife, in a controversial privatisation with the loss of 500 jobs, in a move opposed by trade unionists within the base as well as anti-nuclear campaigners BWXT manage all engineering work on Submarines and Minor Surface Warships including emergency and scheduled maintenance on both Royal Navy and foreign naval vessels;

BWXT provides hotel accommodation on site at Faslane and manages naval messes, accommodating all Royal Navy personnel. It also manages all storage facilities at both Faslane and Coulport and provides cleaning services and grounds maintenance as well as berthing services and radioactive waste processing. At Faslane BWXT also operate the 25,000 DWT Ship-lift, which is capable of docking a Trident Class Submarine. Additionally, at Coulport, the unique floating berthing facility for loading and unloading Trident warheads (the Explosives Handling Jetty) is also operated by BWXT.

Commencing early in the new millenium, a multi-billion pound Trident fleet refitting programme, installing a new type of nuclear reactor core (same design as fitted to the Astute class of nuclear hunter-killer submarines) was scheduled to be to be completed at Rosyth. But politics demanded otherwise and the work, together with the multi-billion investment was transferred to HMS Devonport in Plymouth. The result was a massive multi-million cost over-run and the Trident submarine fleet being rendered almost useless for extended periods.

The first of the fleet, HMS Vanguard, was scheduled to complete its refit at the end of 2004 and return to operational use at the beginning of 2005. but extensive fitting problems were encountered replacing the original reactor with the new reactor design (they were different sizes) and delays resulted in the return being eight or nine months late.

The setback was so serious the Ministry of Defence considered sending HMS Victorious, next in line for a refit, and the remaining submarines to the US navy submarine base in Kings Bay Georgia in the US so that the work could be completed within agreed time constraints. Additional information:

The proposed Trident replacement, if approved and implemented, is scheduled to start within the next few years will bring with it a myriad of difficulties, hopefully nothing major but history is often repetitive.

Other uses for Faslane

Additional to the nuclear powered and nuclear-armed Trident fleet, Faslane also houses up to five conventionally armed nuclear submarines and Mine Countermeasures ships. Also at Faslane is a Diving Group, who are deployed to clear explosives over a huge remote area off the West coast of Scotland, including Cape Wrath. The Base is also a training centre for naval staff and provides Nato berthing and Command and Control facilities. It also routinely hosts visiting American and French nuclear submarines. In 2001, the marine base at Condor near Arbroath was transferred to Faslane so that marines would provide protection for the nuclear submarine fleet.

The future of the base

The government recently announced that the base is to be massively extended so that the entire UK fleet of submarines, (including conventional submarines)  and submarines laid up, (no longer in operational use) are to be located at or near to Faslane.

Possibly up to 30 deactivated nuclear submarines are docked at Rosyth and Davenport pending a determination about their eventual safe dismantling and disposal.  “Pigs might fly” before a decision is taken and it is possible they will be barged to Scotland for long term docking in some quiet loch not that far from Faslane.

Work commenced at the beginning of 2015 and will take 5 years or more to complete. The end result will be the largest deep water submarine base in the world. Scotland is so lucky (pun) 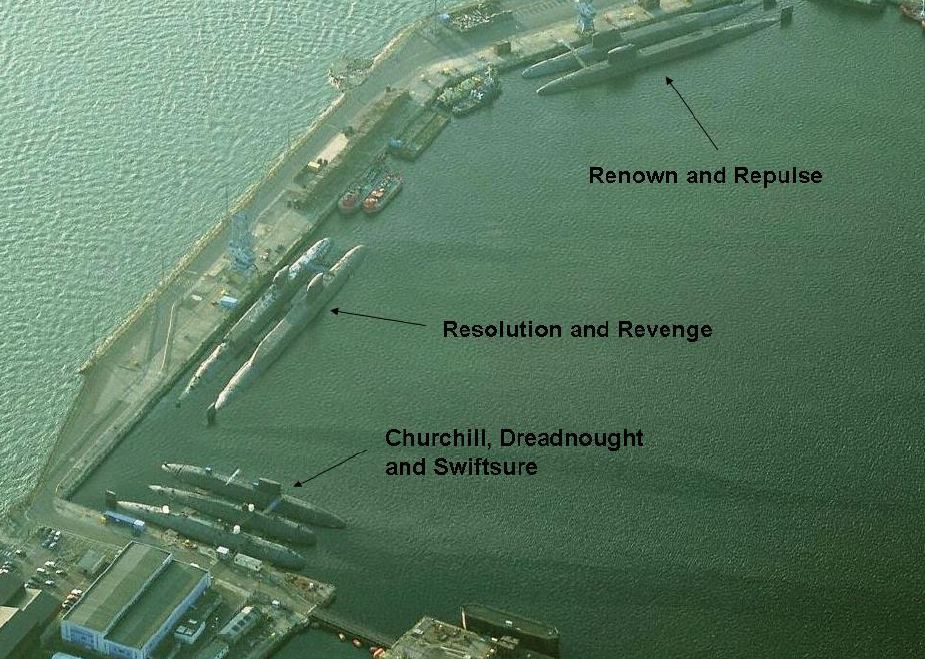