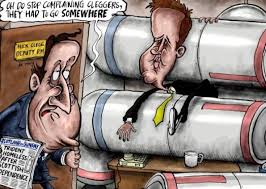 “Those whom the gods wish to destroy they first make mad!!!!” – Westminster Makes it’s move on the SNP

The Unionist parties at Westminster are agreed on a pact establishing, maintaining and strengthening formal and informal contact with the Scottish Government in Edinburgh effectively sidelining Scottish MP’s at Westminster. It is likely discussion of  “Scottish Business” at Westminster will be restricted to one day weekly so that Scotland’s first minister will be forced to recall MP’s back to Scotland 3-4 days a week to find them something to do!!

The Westminster establishment is making it’s statement, “do not mess with our haloed place. We call the shots.  So there it is Westminster is unafraid of Scottish representation so what is to be done? Well!  unionist MP’s are afraid they may be outflanked by a Scottish Government who may well call upon the people of Scotland once more, to give voice through a referendum requiring the UK government to accept the will of the people in a matter of concern. The Scottish National Party might include in their manifesto a commitment to hold a referendum on Trident.

It is a fact Westminster will refuse to give up Trident and the SNP needs to recognize this. And also that so long as Scotland remains within the Union, Faslane will be used as the operational base for the UK submarine fleet (conventional and nuclear). But!!

Nuclear warheads are another matter. There is nothing to be lost and everything to gain from relocating all warheads to the US submarine base at Subic Bay. British nuclear submarines are wholly compatible with those of the USA and routinely “drop in” to Kings Bay for many operational reasons. Removal of the warheads would be welcomed by the USA and since all the facilities are in place the costs would be very low.

Weapons bunkers at Faslane would be utilised for storage of conventional weaponry so there would be a full take up of facilities in support of the increased fleet. The foregoing might well be put to the people of Scotland in a referendum in  2016-17.  Assuming a positive vote, Westminster would need to give careful thought to the matter. I doubt they would decline the request.  So.  A win win situation is possible.  But Westminster politicians might just “cut their throats” and say No!! Forcing a second independence referendum.