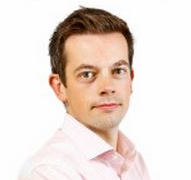 Federalism or Independence – Andy Maciver is a former Scottish Conservative Head of Communications.

The 2015 General Election campaign propelled David Cameron back into Downing Street pulling England towards the Tories and pushing even more of Scotland into the welcoming arms of the SNP, both at the expense of Labour.

And the exasperating irony is that the Prime Minister and advisors hold the antidote in the palm of their hands. Federalism.

Federalism is the recovery formula for both country and party. It can equalise and heal the British state, which remains one of the developed world’s most centralised.

And it can free the Conservative movements in the north of England and Scotland to make the case for workers’ conservatism without the intoxicating influence of London.

British devolution is a recipe for conflict and chaos. It is not working; it is never going to work.

There is increasing realisation that the only two outcomes are independence  (for Scotland, at least) or federalism.

The time has now come for Conservatives to do the right thing. Stand up. Face up. Speak up and Act in support of Federalism:  (conservativehome)

By any definition, Scotland has already left the Union. Its politics and its national sense of identity make it at best a semi-detached reluctant appendage and at worst a major problem for the English.

The UK must federalise or England must accept the inevitable and make the positive decision to end the Union for itself.

The map is clear for conservatives.  Scotland is ‘yellow’ and England is overwhelmingly ‘blue’ and there is no electoral advantage whatsoever in pretending otherwise.

Nor is there any moral purpose in deploying all the arguments used by the old empire loyalists in the early 20th Century who genuinely believed that we would be ‘better together’ under some form of Imperial Parliament. They were wrong then and ‘Unionists’ are wrong today.

There is therefore only one option. Independence for both Scotland and England.

Both ultimately would benefit. Nobody, after all, would seriously suggest that we should seek a political union with other parts of what were once ‘Britain’ such as Canada, Australia or Ireland.

So we’re a family if England love bombs Scotland to stay but we’re not a family if a British party endeavours to run a British election campaign!

If the latter constitutes good cause for the Scottish Conservatives to distance themselves from the English ones because the “British” brand is tarnished,  then it is even more reason for a full and proper separation of Scotland and England.

The Union is not sacrosanct. It can survive only by the genuine willingness of all participants to make it work. That willingness is singularly absent north of the border.

It’s often forgotten that until relatively recently the Scots were seen, and saw themselves, as being more ‘conservative’ than the English.

It’s also often forgotten that there are many Scot Nats who are in reality Tartan Tories who, like their left wing brethren, have felt utterly alienated from the Westminster Politicos – from all parties – who have treated the Scots with disdain.

The SNP vote is a political revolution against the SPAD-u-likes in London. The Scot Nats have grown up and matured into a seriously heavyweight political force.

I don’t think the ship of Great Britain has sailed but I do think that radical federalist change is needed to energise politics in England and Wales outside London.

It was on this basis that I supported devolution to Scotland and Wales, expecting comparable assemblies to follow in England, but the north-east referendum was ill-defined in its offer, had not looked at the detail of boundaries and loyalties, and seemed transparently a management exercise. 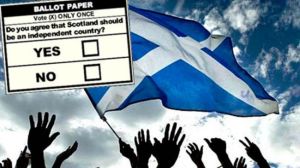 I am not impressed by Davidson she has drawn more lines in the sand than a toddler on the beach with a stick.

The other problem is that every time things might change up pops Lord Forsyth and a couple of other unelected pals and show why they lost in 1997.

The problem with federalism has always been, and remains, a question of how you provide balance between the component parts of the federation.

There would be too many tensions, Trident & the EU would continue to be points of political conflict. I doubt it is possible, or would work for long.

A confederation, on the other hand, has a better chance of working, because it immediately opens up the possibility of working together as sovereign, independent states.

But giving up sovereignty in the interests of a long-term solution to the problems of the union is likely to be a step too far for Westminster.

It is worth remembering that Scotland and England existed as sovereign nations for a much greater period of time than they have been in a Union.

Sure, the relationship was far from easy – but that was then, and our 300 years of learning how to work together will serve us well. 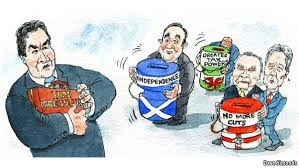 Federal status can only work if the component parts are equal .It will not happen Westminster Establishment will not change it is blind will not learn

Federalism is a cop-out. We should hold out for full independednce. We are big and bold enought to do very well in the world.